Our intent was to preserve and restore as much of the original body trim components as possible. Only when it was determined that the original pieces were too damaged or deteriorated did we decide to replace them with new reproductions.

The following specific trim items were worked on.

1. Bumpers - Both the front and rear bumpers were in very good condition and would have been adequate for a driver-quality restoration. But since I wanted the car to be near show quality, we decided to have them re-chromed. They, along with all other parts were sent out to Specialty Plating in No. Vancouver, BC and received a 4-layer re-plating (quadruple plating).

2. Front Grille - The front grille was generally in quite good condition with minor pitting and manageable (restorable) damage. It had several minor cracks in the main structure that I was able to repair (thank goodness for JB Weld). Then too, it had been re-chromed some time ago already but as with the bumpers and since I wanted the car to be near show quality, we decided to re-plate some sections.

a. Grille Center - was actually broken in two but I was able to repair it by rejoining the two pieces with JB Weld (hoping it will hold once installed). There was virtually no pitting and the chrome was still nearly perfect since it had been re-chromed sometime earlier.

b. Headlight Doors - The actual doors were good enough to be

restorable, though they had some surface rust and minor pitting. They were stripped down to bare metal and painted. Primer was used to fill the pitting.

c. Headlight Door Grilles - The grilles covering the headlight doors (eye lids) were however in very poor condition. Both were quite badly pitted and had some major breaks. These would be replaced with good used originals that were cleaned and re-chromed. The "cat" emblem on the PS headlight door was also re-plated.

Once all these pieces were ready, they were painted with SEM Trim Black. Of course, the front face of all the grille sections were to be left bright (shiny) so the paint needed to be scraped off these surfaces soon after the paint had dried (the larger chrome surfaces had been masked).

3. Tail Lights - were replaced with an original fully restored pair that came with the car. The units were disa

ssembled, the housings were cleaned, and the lenses were buffed and polished. The chrome grilles were near perfect and only needed a little touch-up on the painted surfaces. They are now in as new condition. 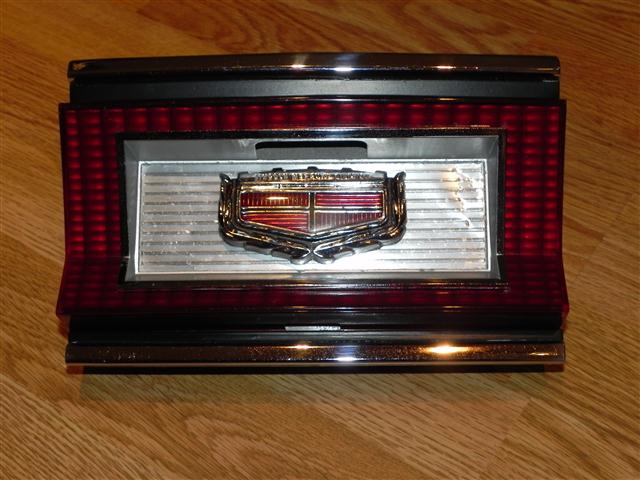 4. Gas Door - the metal door structure was cleaned and repainted. The lens was in excellent condition; only needed to be buffed and polished. The upper and lower chrome trim pieces were replaced with used near perfect items. The center insert frame and emblem were also replaced with a very nice used unit; the frame was restored (though I would still like to replace the foil backing).

a. Front park/signal lights - bezels were still in quite good condition in that the chrome was good and very little pitting; the black painted surfaces I was able to clean up quite well and repaint. The lenses too were very good and was able to buff and polish them to near perfect.

b. Side marker lamps - the bezels were very badly pitted, so rather than re-chrome them, were replaced with new reproduction pieces (price was less than re-plating). The plastic lamp housings and lenses were also still very nice and were buffed and polished.

c. Reverse lamps - although they had very minor pitting, the bezels were re-chromed. The lenses were cracked and chipped so were replaced with new reproduction "concours" quality units.

6. Hood & Trunk lip trim - both were in "presentable" condition and other than just buffing and polishing to remove some of the light surface scratches, were reinstalled.

After the first year of showing and more critical inspection, these were both replaced with NOS units.

7. Window & drip rail trim - these stainless steel trim pieces were all not in good condition in that many were bent or dented in various places. I had a very good used replacement set of all the pieces I needed to replace those that were damaged. I then buffed and polished all the pieces to where they are now in excellent condition.

8. Door handles - were both in very good condition with very minor pitting, but to have them look perfect, I had them re-chromed as well.

9. Emblems - were mostly in quite poor condition though would have been very adequate for a driver-quality restoration. The only emblem that was near perfect was the left front extension piece. All others (and these classic cars had many) were replaced with near perfect used original units.