When we first bought the car, the interior appeared to be in quite good condition. But as with most of the rest of the car, this was also short lived. Much of the upholstery would need to be redone. The interior trim would also need to be cleaned up and in some cases replaced. 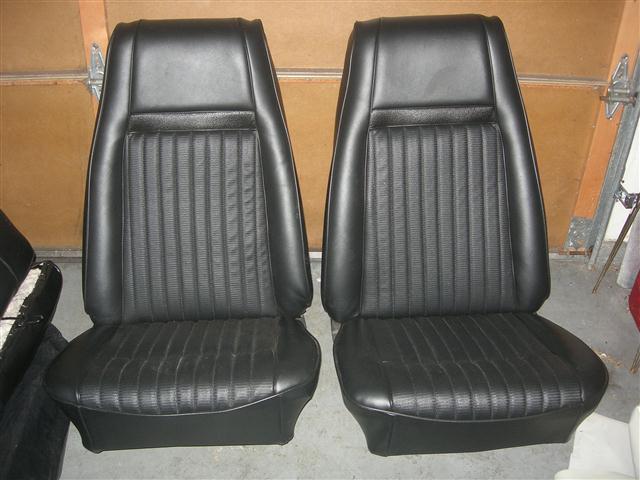 Both the two front bucket seats and the rear seat were reupholstered. Both front seats were in poor condition and needed to be redone. And, though the rear seat was in excellent condition, it was also reupholstered because we could no longer get the original Comfort Weave material and we wanted to have the front and rear seats look the same. I purchased a custom made set of reproduction Comfort Weave covers for all 3 seats and backs, and also new seat foams for the front seats (no extra foam for the rear other than that applied to the covers).

After the old material was stripped from the seat frames, I cleaned (wire brush) and repainted the frames. I also discovered the driver's seat frame had a break as well as several springs were broken. These were repaired by upholsterer Menno Janzen before installing the material. He then replaced all the seat foams and burlap spring covering before installing the new covers.

The carpets, both front and rear were in near perfect condition so were kept and reinstalled on completion of the restoration.

Although the headliner was in remarkably good condition, it would need to be removed so that the roof underside could be cleaned of all rust and painted. The rust was so bad that it would "rain" down on us through the headliner perforations as we were driving.

The existing bows were still good so were cleaned and painted.

A new reproduction headliner was purchased and later installed at Moe's Auto Services in Surrey, BC once the painting was completed. Before the headliner was put in, they also installed a layer of Sound Deadener on the "ceiling". 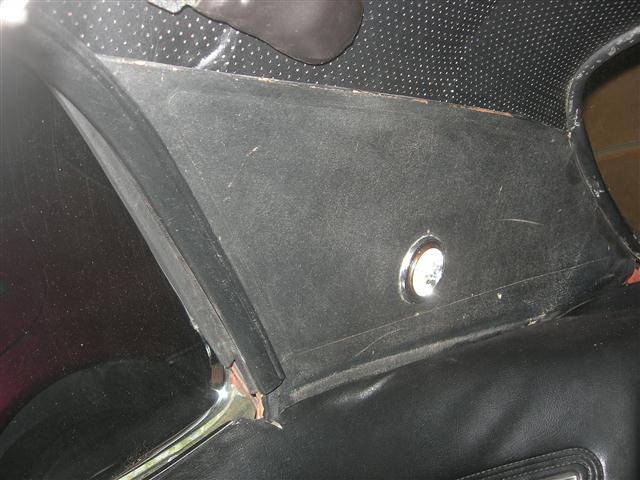 Along with the headliner, the rear quarter Sail Panels were also replaced. After pulling the originals out, they were pretty well useless. I was able to get a set custom made for the Eliminator application which is somewhat unique from the standard Cougar and almost impossible to buy off the shelf.

4. Sun Visors - are in excellent condition other than the chrome brackets and center pins. The visors have been cleaned and polished (Meguiar's); the brackets and pins have been replaced with new reproduction items.

5. Package Tray - was also replaced since the old one was fairly badly warped and no longer had the correct  covering.

a. Dash Cover had separated slightly at each front corner, at the point it meets the windshield. This was re-glued. It has been totally cleaned with Meguiar's Vinyl Cleaner (#39) and Protectant (#40) so that it looks like a new unit.

b. Instrument Gauge Panel was disassembled and cleaned. The lens panel was removed and all lenses were hand buffed and polished so that they now are near perfect. All lamps were replaced with new ones.

The electrical contact points for the lamp holders were cleaned to ensure good connections. The panel face was repainted

c. Clock - was completely rebuilt. The old clock no longer ran so rather than try to repair it, I purchased a new OEM movement and installed it. The lens had already been replaced earlier by the previous owner so I did not need to do much other than just a light polish.

d. Radio Bezel was quite scratched and worn so was replaced with a new reproduction item.

The console was also generally in very good condition with no damage; just a few minor flaws being evident as follows. 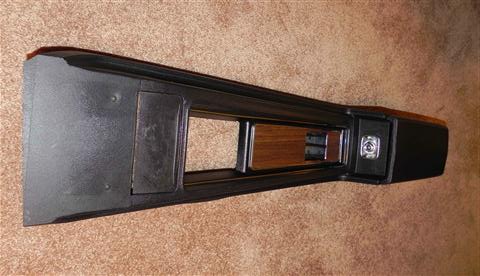 a. Console Lid (Arm Rest Pad) - the old lid was quite deformed and worn so was replaced with a new reproduction pad.

b. Console Woodgrain Insert - also showed signs of wear especially on the chrome finished edges so was replaced with a perfect new reproduction unit.

The rest of the console components were cleaned and polished, or repainted were applicable (ash trays).

9. Seat Belts - were also in very good condition and were hardly faded or discolored; only very dirty. They were soaked in soap water and then scrubbed clean to a near new appearance. Even the metal clasps were still in excellent condition with no rust or pitting.

10. Steering Wheel - is generally in quite good condition and will be kept and restored. The chrome tape around the rim has let loose so will be replaced. The wood finish on the rim is still very good as is the 3-spoke pad. The rim-blow horn still works properly. However, the center bezel and "cat" emblem are not that good and will be replaced with an excellent used original unit received with the car from the previous owner.